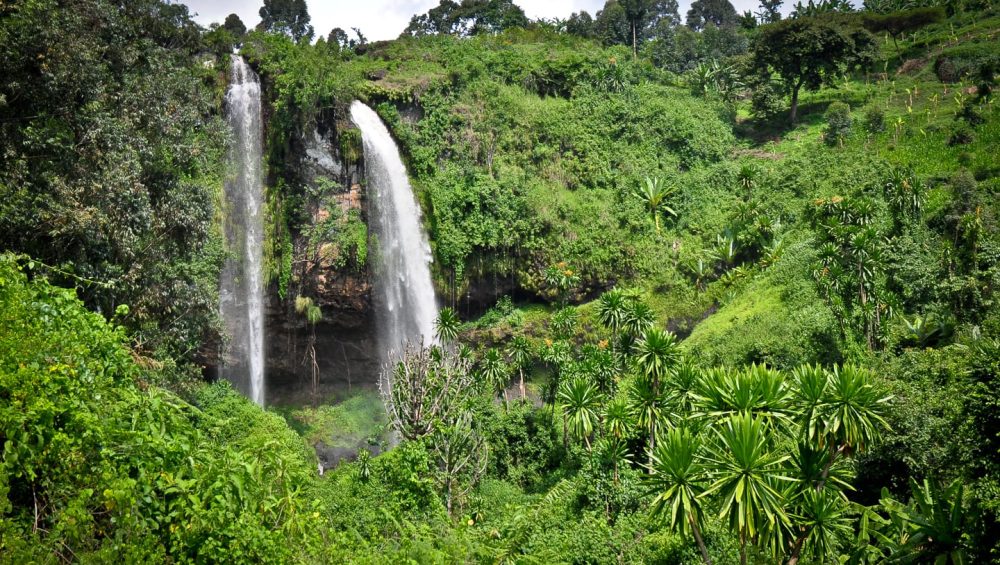 Straddling the Kenyan border, East of Kampala and north of Jinja, the free-standing Mt. Elgon is a centerpiece and one of Uganda’s eponymous parks on both sides of the border. It sees fewer tourists but Sipi Falls on the western slopes of the mountain is becoming a popular tourist drawcard to the area, with most of those transiting to Kidepo Valley National park or doing the Eastern Uganda Safari circuit.

Sipi Falls is the main touristic focus at the Sipi hamlet which lies at a 1775m altitude about 45km from Mbale on a surfaced road. The village overlooks the highest series of the Sipi Falls which is 99m high and is the last of the 3 pretty waterfalls formed on the Sipi River as it cascades down from Mt. Elgon into the Kyoga basin.

The popular hiking trail is about 20 minutes each way and starts from behind the post office at the trading center to the base of the main waterfalls. This can be continued for another 20-30 minutes to reach the one with a cluster of caves on the cliff above the river.

The largest cave extends about 125m into the rock, with minerals and salt deposits. The hike also winds through communities, and lush farms, and offers magnificent views of the area’s valleys and hills.

Around the Elgon Area, Arabica grows. Believed to have been introduced from Ethiopia, this coffee type has naturalized in the region. An experience of tracing the story of coffee from plant to cup was developed to help tourists enjoy one of the region’s top product-coffee.

On tour, you can meet local farmers, tour coffee plantations, learn the cycle of coffee (planting, harvesting, processing-drying, and grinding, and then make yourself a cup). Plant a coffee tree, visit farms and harvest ripe coffee fruits, remove husks, the drying, and traditionally roast them for a cup.

A local and reliable operator (Rob’s Rolling Rock) offers an adventure to rappel 100m alongside the main Sipi Falls (Abseiling). This activity offers some undisputed views of the Area. Also, the company has bolted here 14 rock climbing routes. The adventures are some of the ones not to miss when here for those that love to test nature.

There is a lot more to engage in at Sipi Falls more than other than above. Visitors can engage in activities like mountain biking, and community explorations with local guides, those that want more extended stays can hike Mount Elgon, and the runners’ experience (the Kapchorwa region is home to some of the elite runners in the country, the likes of Joshua Cheptegei). You can join them during their pieces of training.

Getting to Sipi falls

Sipi Falls is in Eastern Uganda, Kapchorwa District about 5 hour’s drive, some 275km from Kampala the capital. The drive goes through some of Uganda’s best towns, from the outskirts of Kampala, to Jinja and Mbale.

There are a lot of Add-ons on the route like a stop at Ssezibwa Falls, Mabira Forest (one of the largest tracts of rainforest if not the largest), the source of the River Nile, and if you travel in an even year, experience the Imbalu Cultural festival one of the biggest in the land of Mbale.

Where to Sleep at Sipi Falls

The Sipi area is serviced by a dozen plus resorts and lodges that cater to the different tastes and budgets of travelers. Some overlook the falls and offer something for everyone.

For the up-market goers, Sipi River Lodge has some secluded space with cottages that overlook the second falls. Less than this are some mid-range options like Rafiki Lodge, Sipi Valley Resort, Sipi Falls Lodges, and Fredson’s Homestay.

Have you been to Sipi Falls before? Let us include it in your safari through Uganda’s safari circuits.