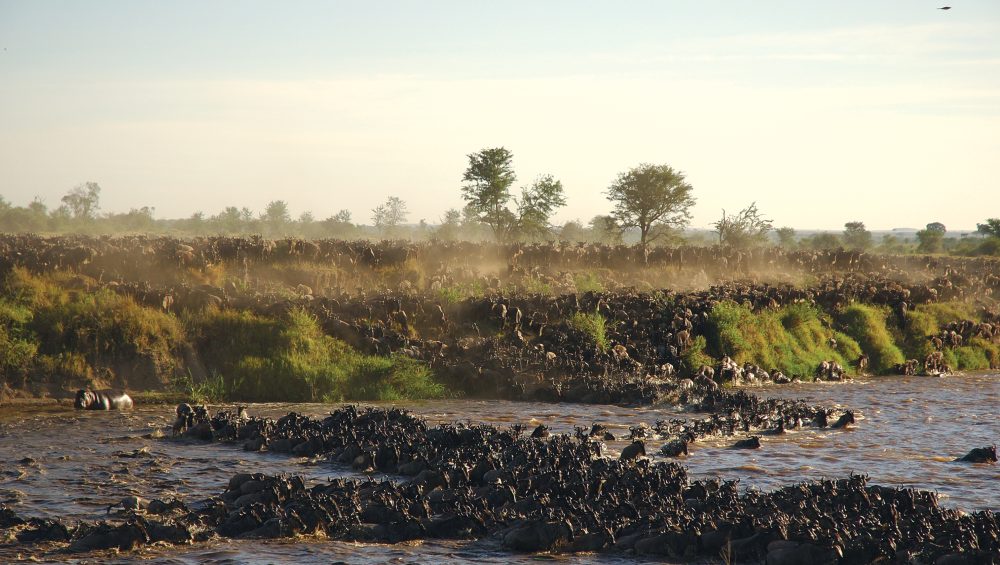 From Serengeti to Masai Mara and back, every year over 2 million wildebeests mixed with zebras and other antelopes, follow the loop path from south of Serengeti Plains (Tanzania) through Kenya behind the seasonal rains all-year-round event- The Great Wildebeest Migration. This is one of Africa’s wonders and a great wildlife spectacle one can ever witness while in Africa.

Migration is a natural phenomenon and each year millions of Animals around the world set out on journeys in search of mating chances, food, and shelter. The Great Wildebeest Migration is one of the world’s largest animal migrations. It is an excellent experience that lures many to Tanzania to witness these animals crossing the beautiful and endless plains. The movement is annual and there is a unique activity that happens between the different months. However, June and July are the famous months.

TIMING IS EVERYTHING FOR THE EVENT

(Yearly Breakdown of the Migration)

Calving, crossing the two rivers and avoiding predators, the herds never stop moving. The migration is ever on throughout the year. For your proper timing and planning, we break down the different months, showing where, when, and what happens with the herds.

The southward trek from the Northeast of Serengeti and Masai Mara ends in January. This is at the eastern edge of the Ngorongoro Conservation Area around Ndutu. The wildebeests feed on the fresh grass as they move towards Kusini in south Serengeti. These months (January, February, to March), are the Calving season. There is no real start or end of the circular drift of these herds. It is just reasonable to say the calving season is the start of migration but is a continuous process. Within this period, about 400,000 calves are born. These are always vulnerable and are easy targets for predators. You can experience the calving and cats in action during these months when you visit the southern Serengeti on your Migration tour. You can also include the part of the park on a combined safari through northern Tanzania.

The Gnu herds drift northwards towards central Serengeti to the western corridor. Joined by Zebras and other antelopes, they stretch kilometers and Moru Kopjes. By the end of May, the mating season is on and the calves are strong to walk, so the journey continues further north as zebras, and gazelles, graze along.

These are the famous months of the odyssey. They are also the toughest as they cross the Grumeti River (In June). By July, the herds have reached the Grumeti River and area in the northern part of Serengeti and are set to cross the Mara River into Masai Mara in Kenya.

Each animal in the odyssey (that completes the cycle) faces a challenge to cross these rivers which is a tense and an ordeal challenge because the rivers are infested with crocodiles. It is risky and deaths are too much, this is what attracts most travelers that follow the migration and are always excited to watch. The timing and day when they cross are natural and now one can tell when. But later in July, the animals successfully crossed. The daily crossing is an incredible scene.

These months, the herds are in Kenya’s Masai Mara after the challenge of crossing the rivers (those that survive the teeth of the crocodiles and the currents of the river) with others remaining in Northern Serengeti. By September, the mega herd splits and the Masai Mara is where one can witness the continued journey. The main chaos by the large herds is done by October but the herds have to face crossing the Mara River on the return journey to Tanzania.

The late October and early November rains start and the wildebeests are in Eastern Serengeti, in the Namiri Plains. By December they are reaching the south again through the parts of the Ngorongoro Conservation Area-Ndutu areas. The cycle then reaches the end and its start.

READY TO PLAN A GREAT MIGRATION SAFARI IN THE SERENGETI?

Don’t miss out on the action as millions of animal’s hooves run against the Serengeti and Masai Mara plains, battle the strong currents and sharp teeth of crocodiles as they traverse the spots on the Grumeti and Mara Rivers, running away from predators (lions, leopards, cheetahs, hyenas), all in one of the greatest wildlife shows on earth- The Great Wildebeest Migration.

Check out our Tanzania Safaris.