THE CHIMPANZEES OF KYAMBURA GORGE 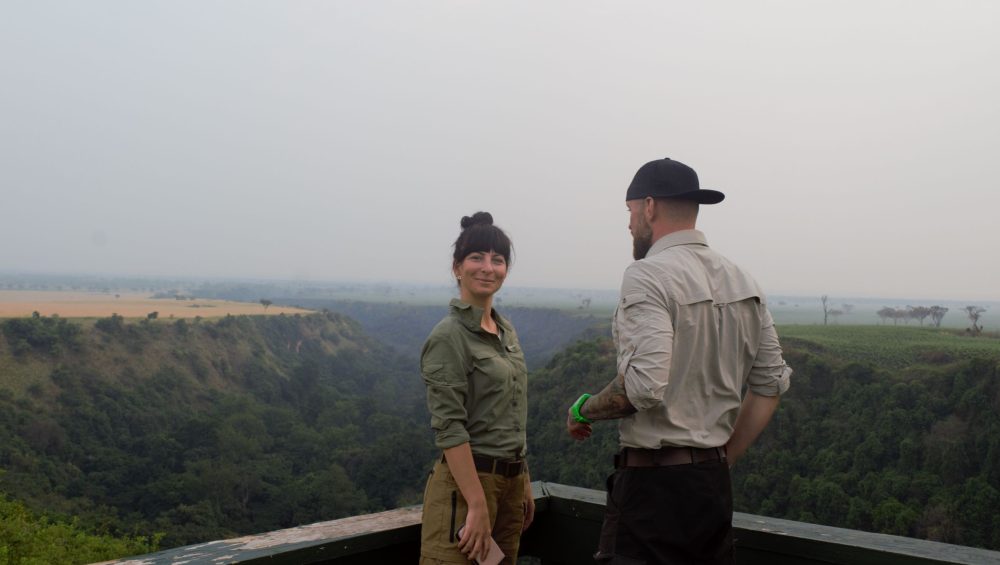 At Queen Elizabeth National park (Uganda) is the Kyambura Gorge (100m deep), and inside the gorge, a group of chimpanzees has survived against all odds. The chimpanzees of Kyambura Gorge, unlike those of Kibale Forest, are not guaranteed to be sighted, but sometimes you hear them hoot, and you know where to find them.

Kyambura Gorge is a buffer zone to Queen Elizabeth National park. Visitors to the park can visit the gorge, and also visit the communities around. It is a magnificent wild place and is nicknamed the “Valley of Apes” because of the community of chimpanzees that is here. The group is believed to have been cut off from the rest of the species and has survived in the gorge since then.

Despite the risk of missing these chimpanzees, chimpanzee tracking at the gorge is one of the popular tourist activities at Queen Elizabeth National park. Kyambura Gorge is made of a 16km strip of riparian forest and is on a boundary with the Kyambura Wildlife Reserve. Its confined nature makes it easy to locate the chimpanzees here by sound. Chimpanzees spend most of their time above in the vegetation canopy as they feed and sleep. This makes it difficult to observe and photograph but sometimes they move on the ground.

Sloping into the gorge, you receive a briefing from a ranger either at the Fig Tree Camp or immediately at the trail to the gorge. The sunken rainforest that fills the gorge is carved into the savanna of the park and houses a community of over 29 chimpanzees. The guided chimpanzee tracking session departs 2 times daily from the camp on the western rim of the gorge. A permit is 50 USD, and the fees include a guiding fee, chimpanzee tracking, and the nature walk but excludes the 40 USD park entrance that is paid to the booking office (The entrance fee last for 24 hours).

Trackers leave in groups at 08:00 and 13:00, and a single expedition/excursion takes about 3 hours depending on how quickly you locate the chimpanzees. Kyambura gorge is one of Uganda’s 3 reliable chimpanzee tracking sites coming 3rd behind Kalinzu Forest and Kibale National park in the first place. Kyambura gorge has a success rate of 85% but in the past decade, it has dropped to about 50%. The gorge hosts other primates like the Vervet monkeys, Black and White colobus, and olive baboons. These are the common ones and the less common is the Red Tailed Monkey.

Being carved into the savanna of Queen Elizabeth National park, the gorge has also offered some lucky visitors sighting of Hyenas, leopards, and giant forest hogs. The river (River Kyambura) that goes through the gorge hosts several hippos. For bird watchers/Avians, Kyambura is a good spot for forest birding. It is one of the places in Uganda where one can see the Black bee-eater and it also has other species like the Blue-bellied kingfisher, Great Blue, Ross’s turacos, and Pied Kingfishers, among other forest birds.

The name of the gorge-Kyambura literary translates to “I didn’t find it”. Local history has it that, the Kyambura River used to flood and wash away property from the community. After the volumes would reduce, members would walk by the river to find the property, and when they couldn’t find it, they would return and say “Kyambura” to mean that they didn’t find the property hence the gorge getting the name from the river.

Chimpanzees are what make most people descend into the gorge, but it has a lot to offer from nature walks, bird watching, photography, and filming.

Book your chimpanzee safari to Uganda or incorporate the chimpanzee tracking excursion at Kyambura Gorge in a visit to Queen Elizabeth National park alongside game drives and Kazinga Channel boat safari.