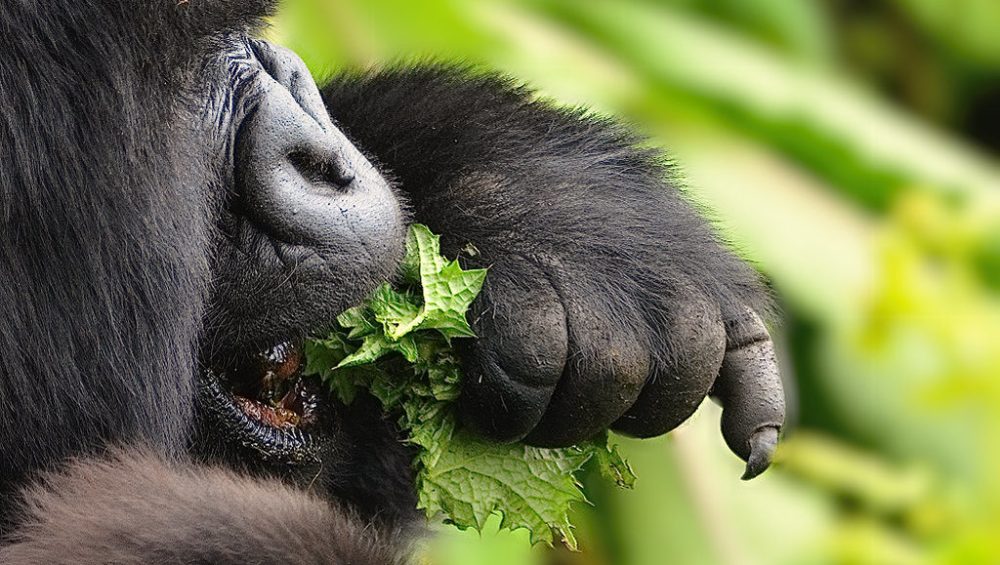 Mountain gorillas are primates, an order of mammals that includes apes, monkeys, tarsiers, lemurs, and us (humans). They are considered the largest primates in the world (the heaviest was recorded at Volcanoes National Park in Rwanda with 220kgs). Mountain gorillas are not monkeys despite some referring to them as monkeys. Monkeys have tails while apes don’t. In this article we hint at some of the facts about mountain gorillas.

They (mountain gorillas) rank as the most endangered species in the globe. Like humans, they have opposable thumbs, their hind legs are shorter than the front legs, and this makes them knuckle-walkers. But they can also walk on 2 hind legs, they are interactive and intelligent species. Since the 1990s, there has been a great interest, to an all-time high, and now gorilla tracking safaris have gained popularity and surged.

Travelers pay anywhere from 450 USD (in DR Congo), 700 USD (in Uganda), and 1500 USD in Rwanda for a gorilla permit. This allows one to join a group of 8, and spend 1 hour with a gorilla family in their native home. Gorilla tracking trips are an incredible encounter/ experience, sitting on the cold forest floor and watching them go about their days. Babies cling to mothers, and silverbacks are protective over the group members, the experience is sometimes indescribable.

Here is a look at some facts about mountain gorillas.

Fewer than 1300 exist (they are endangered)

Mountain gorillas are a subspecies of and they are endangered according to IUCN after they were announced so in 2018 from the Critically Endangered status. According to the last census, which was done by the countries (DR Congo, Uganda, and Rwanda) in 2018, there were 1063 individuals. The census is done every 5-10 years.

The genetic makeup of humans and mountains. Research indicates that they share 98% of their DNA with that of humans. Each individual is unique “Humans have fingerprints, gorillas have noses that differ from each”. After the chimpanzees and bonobos, mountain gorillas are next to humans.

They have 16 different calls

Gorillas forage. They only feed on stems, shoots, and leaves. They survive in lush forests that provide ample diet and quantity to feed on. They spend about a quarter of their day eating. About 86% of their diet is made of vegetables. They can also eat small insects, ants, roots, fruits, and flowers, to add nutrients.

They are in 2 Areas (3 countries in the world)

These subspecies of Eastern Gorillas are a bit different from their counterparts Eastern Low land gorillas. They survive in 3 countries (Uganda, Rwanda, and DR Congo). The two groups are in the Virunga ranges (Virunga National park in DR Congo, Volcanoes National park in Rwanda, and Mgahinga Gorilla National Park in Uganda), and the other group is in Bwindi Impenetrable National park. Half of these are at Bwindi Impenetrable National Park. There are no Mountain gorillas in zoos because they survive in high altitudes.

Unlike in most mammals, where females lead groups, Alpha males/ silverbacks lead a group/family of mountain gorillas. They live in families of around 10 individuals, a male, and several females. Males and females take care of infants.

When gorillas reach a mature age they leave a group at times mostly females when they get a mate. Females become sexually mature at the age of 7-8 years. Males usually go if they become inferior or want to be independent or fail after trying to take over leadership. This behavior of leaving also reduces the chances of inbreeding.

They are also peaceful despite their scary face and size. If they weren’t, we wouldn’t be visiting these giants because they would attack us. But there are rare cases of attacks on trekkers (they are shy animals).

On looking at mountain gorillas, their hair/fur looks soft. But it is a lot coarser than a human hair.

When Mature, males grow silver hair on the back

When young, gorillas are black in color. The males have black backs but they grow to become silverbacks. Not all silverbacks become dominant or take on leadership. Between 8-12 years, they develop a silver “saddle” on their backs. The grey is very strong and uniform.

Diseases humans can suffer, they also can.

The contagious diseases that humans can have, the mountain gorillas can also contract. This is why when visiting gorillas, you should declare such illnesses as flu, or cough to the operator or park staff. Visitors are not allowed to approach them at less than 8m to avoid the spread of such disease. We are also not allowed to feed them or eat in their vicinity. Also, visitors should wear surgical masks when watching gorillas.

Why they are called mountain gorillas.

Mountain gorillas, just like their name reside at an elevation ranging from 1500m to 3700m Above Sea Level. This is why there is none in the zoo. It can be quite cold up in the Virungas and Bwindi and this is the reason behind their thick fur. It is an adaptation to live in these conditions.

These are a few of the facts about mountain gorillas. You can meet these gentle giants when you opt for a gorilla tracking trip to Either Rwanda or Uganda. Then you will see some that are physical and also support their conservation.