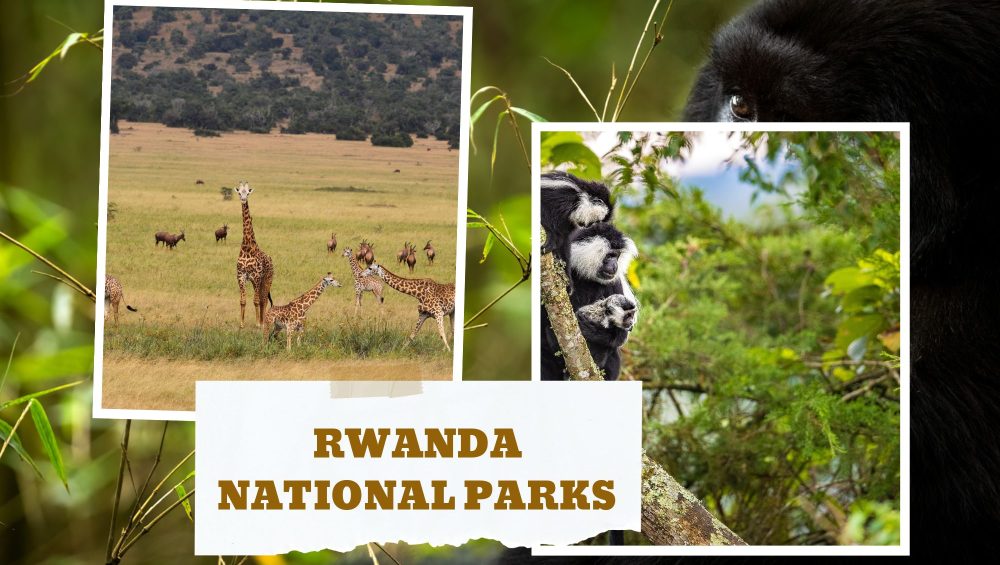 In the East of the African continent lies one of the smallest countries in Africa, Rwanda a landlocked country measuring 26,338 square kilometers is neighbored by Uganda, Burundi, Tanzania, and the Democratic Republic of Congo. The beautiful landscape of gently sloping hills that are noticeable from every corner of the country led it to be dubbed the “land of a thousand hills.” Rwanda’s capital Kigali is famously known for being the cleanest and most organized city in Africa, not forgetting that it also hosts endangered Mountain gorillas.

Rwanda has a variety of beautiful features worthy to visit; from the beautiful hills covered in green vegetation to the diverse wildlife consisting of big 5 safari animals to the enormous mountain gorillas and small birds and reptiles found in any of the national parks spread in different parts of the country. The country has well-built infrastructure ranging from organized transport and accommodation infrastructure that make your stay in Rwanda comfortable and exciting, it is also one of the safest countries in Africa and it is without a doubt a popular destination for travelers all over the world.

Here are some of the major attractions and activities for an exciting and adventurous excursion in Rwanda.

Established in the 1920s, the park consists of 5 volcanic mountains which are part of the 8 Virunga Mountains, these are Mount Karisimbi, Bisoke, Sabinyo, Gahinga, and Muhabura. Located in the Northern part of Rwanda, this conservation area is famous for mountain gorilla trekking with currently 12 gorilla families located at the base of each of the five mountains.

Volcanoes National Park has a rich vegetation cover consisting of tall trees forming canopies, and wide plant varieties that favor the stay for not only mountain gorillas but also a variety of wildlife species like elephants, monkeys, buffaloes, and over 300 bird species.

Volcanoes National Park is a special park as it is where Dian Fossey, a primatologist made her research and study about habituating gorillas, and therefore the first ever visited gorilla family was here at Mount Karisimbi. Due to its rich biodiversity, the park was declared a UNESCO heritage site, and while visiting the park, you can take part in gorilla trekking which costs $1500 per person, golden monkey treks, nature walks, and hiking any of the four mountains apart from Mount. Sabinyo is only accessible from the Ugandan side as the Rwanda side is very steep. Take part in nature walks and enjoy world-class bird-watching experiences.

Tall trees and thick vegetation cover is what best describes this park. Declared as a national park in 2004 though it already existed since 1903 but faced challenges like deforestation and poaching, the park underwent restoration in 1995 till it was fully ready to be a national park. Due to the tall trees, the rainforest has attracted a number of chimpanzees hence a popular destination for chimpanzee trekking, the tall trees also led to the construction of the canopy walk which is a bridge raised 50 km above the ground and is the second of its kind in Africa.

At only 7 years old, this is the newly added national park in Rwanda, created through the merging forests Gishwati and Mukura forests located in between Volcanoes and Lake Kivu which later inspired its current name Gishwati-Mukura National Park. This national park sits on 13.2 square miles in western Rwanda and is naturally blessed with abundant vegetation cover and animals like bush backs, Tree hyraxes, Red River Hogs, and over 100 bird species such as the Yellow Warbler and Ruwenzori Batis.

Conservatory activities are still ongoing in the park, the LAFREC project together with the communities’ works together to rehabilitate the forest and its inhabitants, and the communities have been indulged in practicing the best farming techniques to conserve the land around the park. Enjoy nature walks, bird watching, and monkey treks when you visit the park.

Established in 1934 it currently has over 500 different bird species and is the only savanna park in Rwanda holding the big 5 safari animals which consist of Elephants, Buffaloes, Lions, Rhinos, and Hippopotamuses. It is the best park to visit for a complete African safari adventure, located close to the Tanzanian border and River Kagera from which it derives its name “Akagera.”

The park’s beautiful landscape and vegetation make it the second most visited park in the country, and also the closest park to the capital city of Kigali. The Park consists of a variety of lakes like Lake Shakani and Ihema which collect water from River Kagera. Enjoy thrilling and exciting activities like boat rides on any of the lakes, bird watching, game drives to see the big 5 and other animals, nature walks, and balloon rides.

Rwanda experiences a tropical climate and therefore has two seasons, the wet and dry seasons. Any of the parks can be visited in either season however depending on what activity one is to carry out such as gorilla trekking, it is better to visit during the dry season between June and September or late December to March since during this period the trails are not slippery and muddy. However, all the parks operate throughout the year.