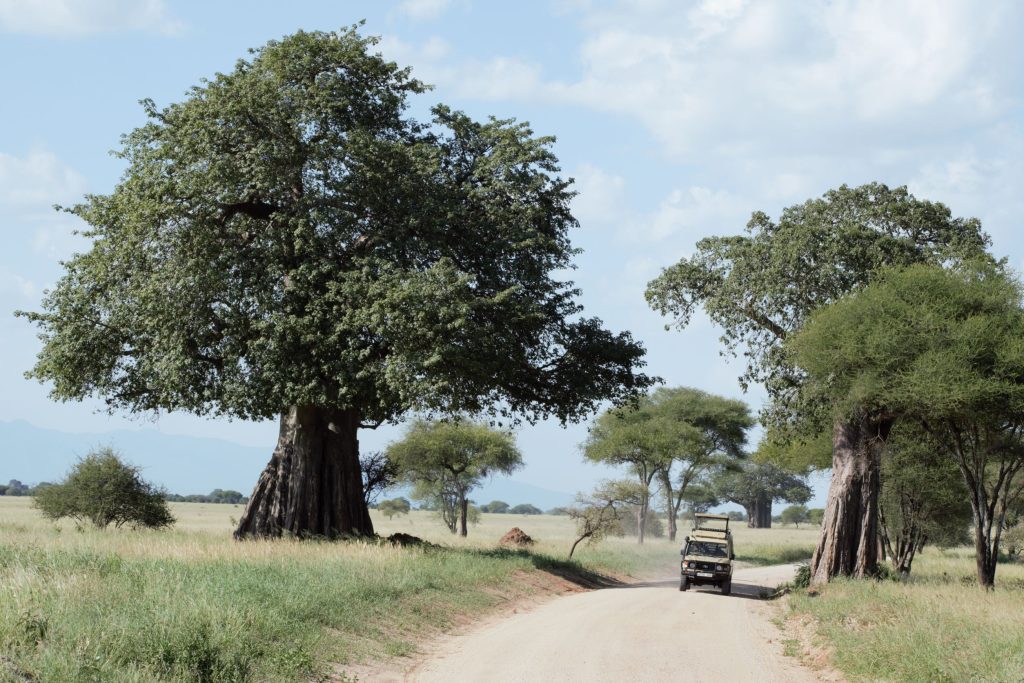 Tarangire National park is impressively splendid and famous for its baobab trees, a large concentration of wildlife mostly elephants, and its southern half shows the quieter side of the park. The national park is in proximity to the Serengeti and Ngorongoro crater and can be added to the larger northern Tanzania safari circuit itinerary.

Situated at an altitude between 900m and 1250m, Tarangire covers 2850km2, and part of it is on the bottom of the Rift Valley. The park’s ecosystem is a habitat of Tanzania’s largest concentration of wildlife after Serengeti National park. It has a prolific elephant population, one of the largest in East Africa, big cats (lions, leopards, cheetahs) that are sustained by the large wildebeest masses, buffaloes, and impalas, zebras, gazelles, and it is host to over 450 bird species. Tarangire hosts 4 of Africa’s big 5 and Rhinos are the notable absent ones.

Despite Tarangire is one of the main parks in the Northern circuit, it is usually missed out or given less time and even those who do, visit the busiest part of it (the northern part) where the major accommodation facilities are located. The trumpeting popularity of Tarangire national park neighbors-Ngorongoro crater and Serengeti make it underrated by travelers and also because the latter has a great migration experience, but we at African Rock Safaris, we believe the park deserves consideration. Spend days here, do game drives, walk, glide in balloons, as you experience the authentic, wealthy romance of the park.

The resident wildlife tells just half of the park’s story. The vegetation of the dry open woodlands, thorny acacia, and the signature baobab trees. The baobab trees, along with the blistered mounds by termites/ants are reason enough for one to visit the park. The Tarangire River from which the park gets its name cleaves the park into two providing a pull factor that lures the animals to steep banks during the dry season to create great game viewing by the river.

To do at the park.

The drive adventures entail viewing games while in a car. Tarangire National park offers its visitors an opportunity to explore the park’s large herds of elephants, wildebeests, zebras, lions, leopards, cheetahs, giraffes, and Oryx, kudu, gazelles, pythons, among other life at the park. The nights under the African sky in an open vehicle with a blanket and the cold under pretty stars. The wilderness is completely different at night because, when we sleep the wilderness doesn’t go at rest, the nocturnals like owls, honey badgers, porcupines, and the cats that ambush prey at night. Morning and evening drives are rewarding, but also the night drives are ones not to miss while at Tarangire.

Tarangire is a good choice for safari goes that wish to encounter more than animals and fewer tourists. Exploring the park on foot is an amazing adventure that takes you to remote areas of the park and gets you closer to nature’s small details that are always missed while on drives. The walks are accompanied by a ranger guide who will teach you how to identify animals by tracks and also track wildlife on foot. Walks are sense awakening and operated in a way that doesn’t disturb nature or threaten human or animal life. It is a whole different dimension of exploring the park.

Get aerial views of one of Africa’s most beautiful wildlife areas. Rise before the sun for a takeoff to soar in the skies in a colorful hot air balloon. The early light of dawn is magic as the balloons ascend to the sky and glide over the amazing landscape, over the Tarangire River, and as you gaze down in amazement at the park’s wildlife, baobab trees, and only to end the ride with a delightful bush breakfast.

Capturing animals/ wildlife photography can be challenging. It requires patience and a bit of luck to get those moments. But with the number of lives at the park. With the concentration of life at the park, it is an opportunity to film large herds of elephants, beautiful landscapes, the coolest trees ever seen, and all the beasts the has to offer.

The park can be well accessed by air, and by road. The park is 121km by road from Arusha city in northern Tanzania. It is about 210km from Kilimanjaro International Airport which is 46km from Arusha. Visitors can also fly from Julius Nyerere International Airport in Dar es Salaam to Arusha airport for a domestic flight to Kuro airport inside the park.