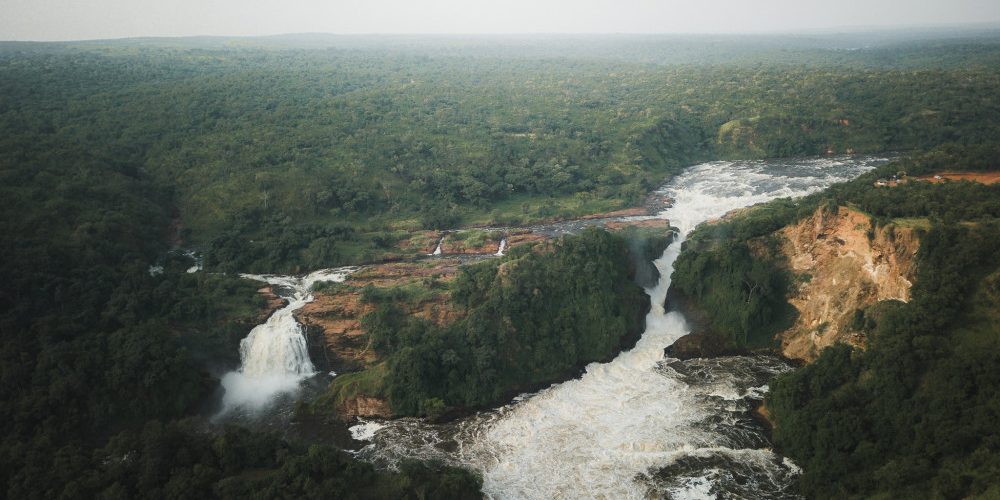 Situated in the northwest of the country about 310km from Kampala. Murchison Falls national park is part of Uganda’s largest conservation area that is 3840km2. It is one of Uganda’s first national parks gazetted in 1952 and was first established as a game reserve in 1926. This makes it Uganda’s oldest conservation area. Murchison Falls national park lies at the end of the Albertine rift valley in the north and the park is bisected by the Victoria Nile to form two sectors. The northern bank area is where drives and the biggest priority game because most of the wildlife is in this palm-dotted area and the southern part is more of forest and few activities take place here. The southern part is where there is the view of the park’s centerpiece- the falls. Here is where the Nile River meets its greatest obstacle to creating the dramatic falls that are the park’s trademark.

The park is one of Uganda’s best parks and has over 74 mammals and 450 bird species. The network of tracks here supports the game drives to almost 70% of the park and the ecosystem protects a variety. The river encourages cruises to the bottom of the falls and the delta.

Murchison Falls national park has 2 falls (Murchison Falls and Uhuru falls). Murchison falls, are the most powerful in the world and it is here where the Nile River narrows into a 7m gorge plunging at 45m. As the water forces here, it splashes creating daily sprinkles. They may not be the biggest, longest, or most impressing in the world, but the fact that many volumes of water squeeze through such a tiny gap, exerts an immense pressure making it the most powerful.

A few areas of Murchison falls national park, can be explored on foot. The Baker trail from the bottom of the falls to the top is one of them. The trail is historical and goes on the banks of the river with a clear view of the falls from the foaming torrent. Usually, after disembarking from the boat, you start from the bottom and hike to the top. Those that usually go for sport fishing, can also get to the sport fishing spot by walking down the trail.

There are two options for a boat safari while at Murchison falls National Park. You either flow with the Nile to the Delta where it meets Lake Albert or opposes and ride to the bottom of the falls. A boat safari to either side is a highlight for any trip to the park and one of the best ways to get a full impression of the park. The river is wide and serene with plenty of wildlife from big mammals that always come by the side to drink like elephants, buffaloes, waterbucks, hippos, crocodiles, and water birds. Lucky ones have even seen a leopard on a boat safari. Birders usually take the delta cruise to search for the elusive shoebill but there are always other fascinating scenes by the river for those that choose to take the cruises.

The northern part of the park is famous for game drives. Some of the parks have 470 bird species, 75 mammal species that include lions, leopards, giraffes, elephants, buffaloes, hyenas, hippos, jackals, among others. There are designated tracks in the park on the Buligi peninsula that converge at the delta point where the Nile River meets Lake Albert. Game drives are done in the early mornings and evenings for great productivity. The southern part is more of a forest with a delightful section of savanna, usually, not explored but it is a prime location for lions- the Honeymoon track.

If you are an avid angler, the park is a rewarding destination for sport fishing. Explore your opportunities to land and break the 113kg record of the Nile perch catch. Experienced Uganda Wildlife Authority and Wild Frontiers guides, will lead you to the fishing spots at the bottom of the falls. Be part of the famous anglers that have been here like Jeremy Wade, Zeb Hogan, among others.

Experience game viewing from heights. Engage in an adventurous way of watching wildlife away from the traditional game drives. Explore the plains soaring feet high and wrap it up with bush breakfast.

The bird watching activity overlaps with the other areas of game viewing (the Buligi peninsula and the cruises on the Victoria Nile). The drives through the network of tracks here, reward with some of the over 450 species of birds that include Bustards, Hornbills, Bee eaters, etc. And the cruises to the top of the falls goes past the Nyamusika cliff that is famous for housing Red Throated Bee eaters, and also the resident water birds like the African darter, fish eagle, cormorants, geese etc.

There are various gates from different routes that access the park. All these used to reach the Nile and cross the river with a vehicle ferry but now there is a bridge. The southern gate approaches from Masindi about 310km from Kampala and also the Bugungu gate which is more scenic. From the North, you can enter via Chobe, Wankwar, Mubako, and Tangi gates. This is when you’re from Pakwach or Kidepo Valley.

By air, you can fly to Pakuba Airstrip or Bugungu airstrip and there are daily flights by Aero link to the park.